70mm Tow Ball suit 4.5-tonne heavy duty Electric Couplings. No CRN means the tow ball is not legal for use on Australian roads and highways for all vehicles made after July 2009.

Drill the shack after the nut is tightened. Insert the split pin and fold it around the nut in a horizontal manner or follow the circumference of the nut.

Trailers over 3.5t towing capacity made after 2009 using 70mm balls must comply with Australian standards and be ADR Approved.

A castellated nut and split pin have been supplied to enable the nut to be fixed with a pin after a torque wrench is applied. 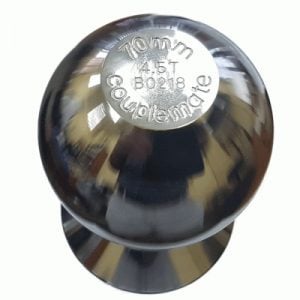 70mm tow balls NOT marked in the fashion below, do NOT comply with Australia Standards. AS4771.2 demands the following

Furthermore, show vehicle inspectors the invoice during the inspection of the trailer or vehicle if required.

The CRN number is required for this type of equipment installed on new vehicles and trailers.

Regulations for Towing and Accessories over 4.5t