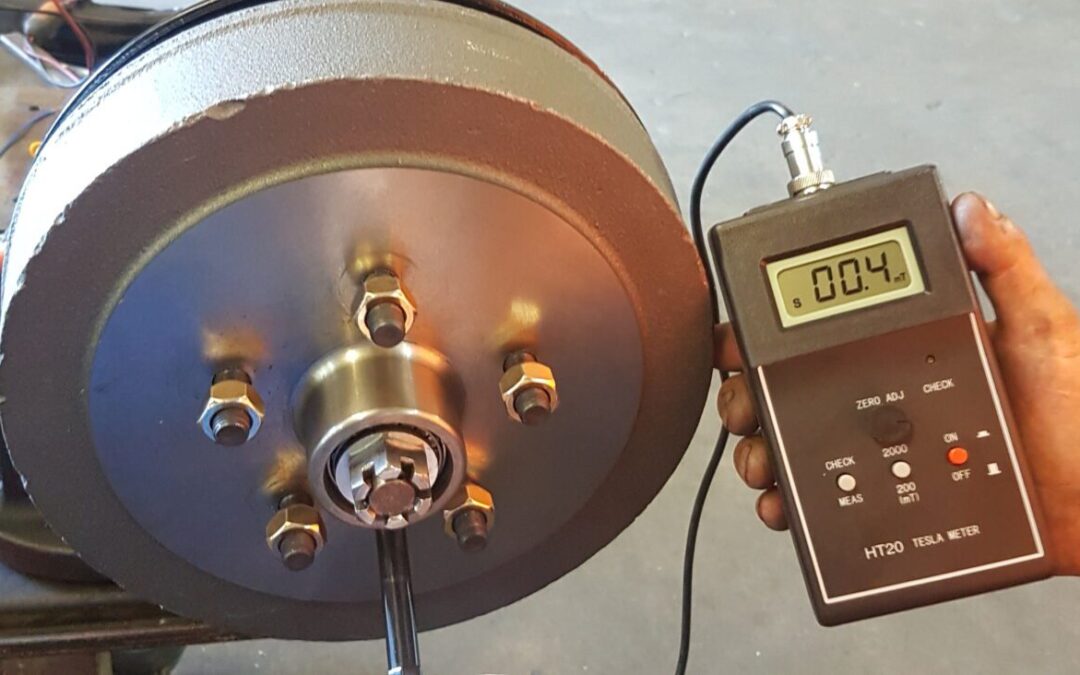 How electric drum brake become electrically polarised was unknown until recently. Couplemate has found electric drum magnets not to be the problem.

This article focuses on rare problems that occur with 12v caravan and camper electric braking systems.

In the past, we have looked at brake shoes, electric magnets, brake controllers, cable size and other trailer parts that have given braking problems. Now we will look deeper into caravan or camper braking problems.

New electric drum brakes work well on new caravans and trailers. However, one side or the other can lose braking power after a few big trips.

Everyone, including me, suspected poor wiring, poor connections or worn magnets of causing poor braking.

Problem Solved or Not

On occasions, we have replaced a drum, and braking efficiency has returned. This remedy was one solution and solved the problem; however, it does not identify its cause.

A recent customer had a problem with weak brakes and asked to purchase a new set of backing plates.

The customer telephoned again and said the new brakes were faulty, in that they worked the same as his old brakes.

We asked for evidence, so he sent us a photo of his ammeter and voltmeter reading 2.8amp and 11.5volts, respectively. These readings were perfect and should result in ideal braking, but alas, it was still mediocre. 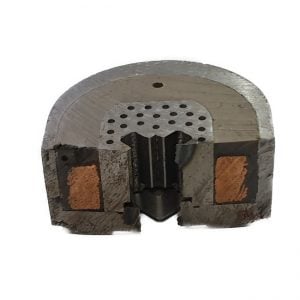 Electric brakes are controlled from the tow vehicle. There is an easy solution for applying a voltage test to electric brakes.

If you have a tandem trailer, pull the breakaway pin then, with the aid of a compass, check north or south on all drums.

Changing positive and negative will cause polarity on the magnets to be reversed.

This test alone does not prove polarisation.

Note: Drums that are partially polarised will not exhibit big braking improvements.

The solution is at the bottom of the page.

Electromagnetic induction was first discovered by Michael Faraday, who made his discovery public in 1831.

A magnetised drum can have excess positive or excess negative ions even when the circuit has been turned OFF.

This is called residual magnetism.

A NEW non-magnetised drum has the same amount of positive and negative ions.

Here is what is happening on caravan electric brake magnets.

In the longitudinal cross-section of an electric magnet, a constant electrical current is running through it. The magnetic field lines are indicated, with their direction shown by arrows. Magnetic flux corresponds to the ‘density of field lines. The magnetic flux is thus densest in the middle of the solenoid and weakest outside of it. 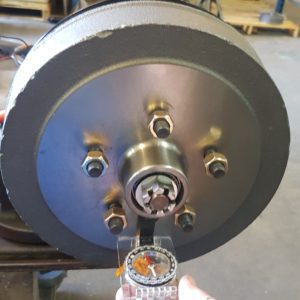 Here is a simple test for your electric drums to test to indicate polarisation.

Place a compass near the face of your drum. If the N or S of the pointer points to the drum, your electric drum has suffered severe magnetic induction.

The compass is ideal for the handyman to perform. The solution to reversing polarity is down a little further in this article.

Initially, we thought that the DC electric induction could significantly reduce your capacity to apply the brake effectively.

A non-responsive electric brake magnet is attempting to engage a residual magnetic or induced magnetic drum.

A magnet producing a North at the magnet face will repel a drum with the same polarity. Furthermore, this means the magnet is not being attracted to the drum, which causes mechanical slippage of the magnet on the drum face and ineffective braking.

However, our test provides this theory wrong.

Drums become magnetised by the consistent application of an energised magnet onto a metallic rotating drum face. As the drum continues to turn, the friction from the magnet on the drum surface causes wear and magnetisation.

The solution to the problem is two-fold, either

Reversing the backing plate polarity is a simple remedy.

If this solution fixes your problem, be sure to leave a comment so other folks know how this remedy worked for you.

Re-test with a compass, and the trailer brakes ON. You will notice the polarity has changed, and your brakes will now be active again.

These are wearing indicators. If any of these holes are missing, your magnets need immediate replacement.

It is wise to replace your brake drum if it has groove lines caused by the electric magnet.

Remanence or remanent magnetisation or residual magnetism is the magnetisation left behind in a ferromagnetic material (such as iron) after an external magnetic field is removed.